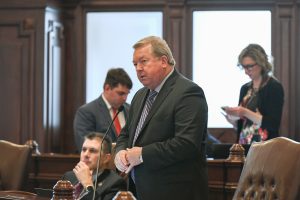 On March 31, I received unanimous Senate approval for legislation I sponsored that ensures survivor benefits are available to all spouses of Downstate Police Pension Fund members upon their deaths. Specifically, House Bill 5447 permits members of the Downstate Police Pension Fund who marry after retirement to designate their spouse for a limited survivor benefit. The deceased pension fund member would have had to be married for a minimum of five years, and the benefit expires after a period of 15 years. The legislation corrects a loophole in the statutes, and received unanimous approval in the House of Representatives on March 4. It now awaits the signature of the Governor.

PRB down to six members, lacks a quorum to conduct business
Illinois’ Prisoner Review Board (PRB) is comprised of 15 members appointed by the Governor. One of the primary purposes of the PRB is to determine whether or not to release certain individuals from prison. Most of the prisoners who come before the PRB are those who were convicted of very serious, usually violent offenses. It’s an incredibly important position that includes an annual salary of $90,000.

State statutes require that these appointees be vetted by the Senate Executive Appointments Committee (EAC) and approved by a majority vote of the Senate within 60 session days. Unfortunately, since taking office, Gov. Pritzker has repeatedly circumvented the appointment process which has led to many of his appointees serving years without receiving Senate confirmation.

He does this by withdrawing their names just before the 60-day clock expires, and then re-appointing them a day or two later, which resets the 60-day clock. It undermines the intent of the statutes and the importance of having qualified people serving on this influential board.

In recent weeks, Gov. Pritzker’s antics have caught up with him. In mid-March, the SEC rejected the nomination of Jeffrey Mears, while the Governor withdrew another nominee, Max Cerda before he could become the subject of a confirmation hearing. Cerda himself was a convicted double murderer who was released from prison in 1998. Cerda generated further controversy this year as a member of the PRB when he voted in favor or releasing a convicted cop-killer he had served time with. Around the same time, Gov. Pritzker also withdrew the nominations of Arthur Mae Perkins and Joseph Ruggiero just hours before their confirmation hearings were set to begin.

Then, last week, Pritzker appointee Oreal James abruptly resigned rather than face a confirmation hearing, and appointee Eleanor Wilson was rejected by the EAC. In Wilson’s case, she was only able to garner half the required number of votes to be confirmed. Both Oreal James and Eleanor Wilson were initially appointed on April 2, 2019, then withdrawn on March 23, 2021. Pritzker reappointed them both on March 25, 2021.

In the meantime, and without being vetted by the SEC, Pritzker’s nominees were serving, taking votes on whether to release inmates, and drawing nearly six-figure annual salaries. During Pritzker’s time in office, the members of the PRB have been voting to release a much higher percentage of inmates, including several individuals convicted in notorious murder cases. Today the 15-member panel only has six members and lacks the statutory quorum to be able to conduct business.

Mark your calendars now for a mobile DMV event that will be held at my West Dundee district office on Tuesday, April 26. The event will take place from 10:00 a.m. to 2:00 p.m., and my office is located at 641 S. 8th Street, in West Dundee.

Available services at this event include:

Residents are encouraged to pre-register for this event, and can secure their spot by visiting https://www.ilsenategop.org/sen_dewitte_west_dundee_sos_mobile_unit. Before coming to the event, residents can visit www.cyberdriveillinois.com to learn about identification requirements for specific services. For additional information or help with pre-registration, please contact Hannah at hseaver@sgop.ilga.gov.

Backlog Remains for Concealed Carry Applicants
Illinois law requires citizens to obtain a concealed carry license (CCL) to be legally allowed to carry a firearm for protection in public. Unfortunately for potential licensees, they may be in for a long wait. According to testimony from Illinois State Police (ISP) Director Brendan Kelly during a Senate committee hearing last week, in February the average wait time for CCL processing was 115 days. One Senator noted, however, that she has heard from constituents waiting as long as 18 months to receive their license. Kelly said ISP is working to reduce the wait time.