Senate Republicans call for cap on sales tax at the pump 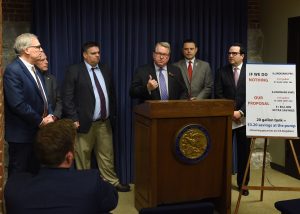 Families are struggling with their personal budgets due to 40-year-high inflation rates. With gasoline prices at the pump topping well over $4 per gallon, Senate Republicans are taking steps to provide Illinoisans with real relief.

As the leading Chief Co-Sponsor of the bill, I helped unveil this legislation at a press conference held Thursday in Springfield. Click here to watch the bill’s Chief Sponsor, Senator Dave Syverson, explain Senate Bill 4195, and click here to view my press conference comments.

Illinoisans must have permanent, substantive tax relief, not the kind of short-term, election-year relief our Governor proposed during his budget address. To that end, I’m joining other Senate Republicans as we call on the General Assembly and the Pritzker Administration to immediately cap the state’s sales tax on motor fuel at 18 cents per gallon. Currently, Illinoisans are paying about 25 cents per gallon in sales tax but could easily soon be paying up to 34 cents if gas prices hit $5.50 per gallon. The proposal has the potential to save consumers up to $1 billion.

Two years and 100+ executive orders into the pandemic, is there an end in sight?
March 9, 2022 marked two years since Gov. Pritzker issued his first disaster declaration in response to COVID-19, allowing him to impose sweeping emergency powers free of legislative input and oversight. Since then, he has re-issued his disaster declaration approximately every 30 days as a way to skirt the 30-day limit on declared disasters imposed through the Emergency Management Agency Act.

I continue to advocate for the reining-in of Gov. Pritzker’s powers, and have co-sponsored legislation that renews Senate Republicans’ calls that the Governor receive General Assembly approval before an emergency declaration is extended past 30 days. Senate Bill 3888 was filed in January of this year and has languished in the Senate Assignments Committee.

During the last two years, Gov. Pritzker has issued over 100 executive orders, a milestone nobody is celebrating. The orders have created chaos, confusion, and devastation. Some of the Governor’s failures throughout the pandemic include:

Recently, the Illinois court system and the bipartisan and bicameral Joint Committee on Administrative Rules (JCAR), a committee on which I sit, both rebuffed the governor’s abuse of his emergency powers.

Former House Speaker Mike Madigan arraigned in federal court
The first appearance in the case of the United State of America v. Michael J Madigan and Michael M McClain took place on Wednesday via telephone conference. U.S. Magistrate Judge Jeffrey Cole handled the arraignment. Speaking through one of his attorneys, Mike Madigan pled not guilty to all counts in the indictment against him.

Madigan was indicted by a federal grand jury on March 2 on 22 counts of alleged public corruption, including racketeering, bribery, wire fraud, and extortion. In the 106-page indictment, the former House Speaker was accused of using his positions as Speaker of the House, Chair of the Illinois Democratic Party, and 13th Ward Democratic Committeeman to create a criminal enterprise to solicit personal financial rewards for himself, his allies, and his associates.

Madigan was first elected to the Illinois House of Representatives in 1971, and served as Speaker for all but two years from 1983-2021, when he resigned under a cloud of controversy.