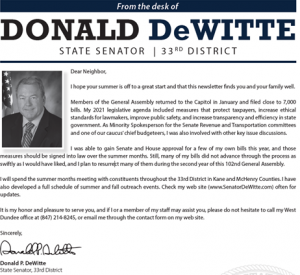 My 2021 End of Session report landed in mailboxes across the 33rd District this week. The report summarizes important legislation from the spring session, and also includes a short survey. The survey is also available digitally. If you would like to take my summer survey, click here.

The EOS report also makes reference to transportation projects that were included in IDOT’s multi year plan. Click here to view the list of IDOT multi-year plan projects for the 33rd District.

I hope you take a few minutes to read through the report, and that you find the information helpful and enlightening. If you did not receive a copy, please call me office at (847) 214-8245, and we will mail you a copy.

Blistering unemployment system audit report details massive failures by Pritzker Administration
A blistering report from the state’s Auditor General reveals major failures by the Pritzker Administration that led to rampant fraud in the state’s unemployment system during the COVID-19 pandemic. As a result of the audit finding, which only covers part of the pandemic period, this week I joined my Senate Republican colleagues in calling for a full audit to get to the bottom of this ongoing mess.

Keep in mind, the report only covered the time period from July 1, 2019, through June 30, 2020, and because the state’s Pandemic Unemployment Program (PUA) did not launch until in May 2020, the audit covers less than two months of that program. The audit is therefore only a snapshot of the extent of the problems.

Despite this limited window into the PUA program, auditors noted numerous major failures by the Pritzker Administration’s Department of Employment Security (IDES), including the refusal to implement even basic safeguards to protect the integrity of the system, especially in regard to the PUA program. At one point in the report, auditors noted that eligibility for the PUA program couldn’t be audited because of the failure of the Administration to accurately document eligibility.

Some of the key findings by the auditors include:

The Auditor General’s findings can be found here.

As I mentioned, Senate Republican Caucus members filed a resolution ordering a full audit of the state’s unemployment system during the COVID-19 pandemic. The audit will make sure that the people of Illinois find out what went wrong, the financial impact, and what can be done to prevent a similar disaster from happening in the future. 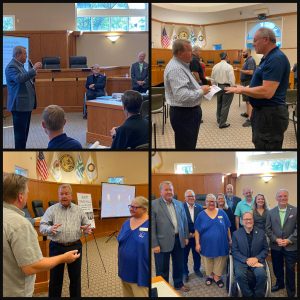 After a brief PowerPoint presentation that outlined the successes and challenges of the most recent legislative session, we took questions for about an hour from the audience. After the event concluded, we stayed an additional half hour to have one-on-one conversations with constituents. It was a great evening.

Thank you to everyone who came out for this event, and as always, it is a pleasure to serve the people of McHenry and Kane Counties in the Illinois Senate. Click here to view the slides we used in our PowerPoint.

Illinois adopts new CDC mask recommendation for vaccinated people
This week, the Centers for Disease Control announced new guidance, which recommends that all individuals, regardless of vaccination status, wear masks indoors in public settings in areas that are considered to have “substantial” or “high” transmission rates of COVID-19. The Illinois Department of Public Health adopted those recommendations shortly after the announcement.

Substantial and high transmission areas are determined by county and are defined as more than 50 cases per 100,000 people on a seven-day basis. The transmission status of each Illinois county can be viewed here.

Uncertainly on COVID rules mounts ahead of school year
As parents begin to plan for the new school year this fall, uncertainty continues to mount, especially following the latest CDC mask recommendation, which states that masks should be worn indoors in all K-12 schools, including teachers, staff, students, and visitors, regardless of vaccination status.

Earlier this month, the CDC issued guidance that stated that vaccinated teachers and students do not have to wear masks in schools and recommended that those unvaccinated continue to wear masks. IDPH adopted those recommendations, but the Illinois State Board of Education (ISBE) indicated the ultimate decision on masks would be left up to local schools.

Now that the CDC issued different guidance, it’s unclear whether ISBE will continue to provide local control to school districts. Nearly 250 school superintendents throughout the state recently sent a letter to the Governor and ISBE advocating for the authority to make the best safety decisions for their students and staff. That letter can be found here.

SOS facilities, Capitol building, state agency offices to require masks
On July 28, the Secretary of State announced the reinstitution of its mask policy beginning Aug. 2. According to a press release, employees and customers at driver services facilities, Secretary of State offices, and the Illinois State Capitol Building will be required to wear a mask.

Secretary of State Jesse White continued to urge the public to consider using online services when possible instead of visiting a facility due to heavy customer volume. Online services can be found at www.cyberdriveillinois.com.

The following day, Governor Pritzker announced that masks will be required in all state-operated buildings for all people, regardless of vaccination status. 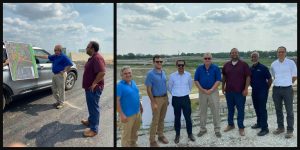 As the Minority Spokesperson for the Senate Transportation Committee, I take a special interest in projects that address capacity, safety, and access issues in Illinois. Earlier this month I had an opportunity to join Senate Transportation Chair Ram Villivalam, Tollway Board Chair Will Evens, Tollway Executive Director Jose Alvarez and others for a tour of the site for the new I-490 extension that will connect I-90 and I-390 to the new western access at O’Hare Airport.

The $2.5 billion project will generate more than 1,000 engineering and construction jobs and creates infrastructure that will ease traffic for the next century in this region. The project is scheduled to be complete in 2025.

Under previous law, if someone had HIV and engaged in sexual activity with another individual without protection, donated their blood, or supplied drug paraphernalia to another person, they would have been guilty of a Class 2 felony that carried a potential penalty of 3 to 7 years in prison. To be charged with the crime, the individual had to have known that they were infected with HIV.

I voted against the legislation and believe it is clearly a dangerous precedent to remove criminal penalties for someone who purposely infects someone with HIV.

Special-needs students to receive more education opportunities under new laws
This year I was happy to support legislation that provides special needs students with additional assistance in completing their education. Many special-needs students attend school at a different pace than their peers, with prior law allowing them to attend school up until the age of 22. For students who reached the age of 22 during the school year, they were forced to leave school on the day of their birthday. Not only did that law abruptly end their schooling, but the students also lost access to numerous special education services that were available through their schools.

House Bill 40 allows special-needs students to continue their education until the end of the school year in which they turn 22. The change will also enable students to celebrate the completion of school by graduating with their classmates.

To help special-needs students who were adversely impacted by school closures during the COVID-19 pandemic, House Bill 2748 allows them to remain eligible for education services through the end of the 2021-2022 school year, even if they turned 22 during the previous year.

Both bills passed the Illinois Senate unanimously and were signed into law this week.