Revised Legislative Maps Pushed Through
We are now three days away from our May 31 scheduled adjournment. We still have many key issues to address, but yesterday legislative maps took center stage in Springfield. Late Thursday evening, revised maps were posted, and sometime around 1:30 AM Friday legislation was filed and simultaneous Senate and House committee hearings were scheduled for 9:30 AM Friday on the new maps. This obviously left very little time for Illinois residents to review the map, let alone file witness slips or sign up to provide oral testimony. Throughout the day I heard from angry constituents who didn’t know about the hearings until after they were over.

This is not the transparent process that the people have asked for and which the Democrats pledged to provide. In fact, this is the EXACT opposite of what the people have demanded. As expected, with few people testifying, the map proposals were approved by committees in party line votes, and then later in the day the Senate and House both approved the gerrymandered, partisan maps in party-line votes.

The ball is now in the Governor’s court. We must not forget that when Governor Pritzker was gubernatorial candidate Pritzker, he made a promise to the people of Illinois that he would veto any map drawn by politicians or their staff. In recent weeks he has walked back that pledge. If you would like to remind the Governor of his promise and let him know he needs to keep his word, you can send him an email here: https://www2.illinois.gov/sites/gov/contactus/Pages/VoiceAnOpinion.aspx. 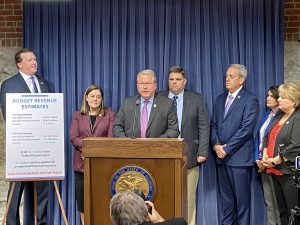 Earlier this week I joined some of my Senate Republican colleagues to discuss our budget expectations for Fiscal Year 2022, and to renew our call for the Governor to preserve job creation incentives and to take tax increases off the table as the budget takes final form.

According to data from the Commission on Government Forecasting and Accountability (COGFA) and the Governor’s Office on Management and Budget (GOMB), revenues from income and sales taxes for the current fiscal year and upcoming year are $8 billion higher than anticipated. When coupled with the additional $8.1 billion that is coming to Illinois through new federal COVID-19 relief funds, the state has $16.1 billion more in revenue than expected. 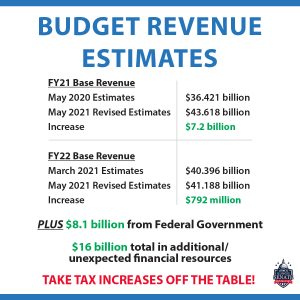 During his budget address earlier this year, Governor JB Pritzker expressed a desire to eliminate pro-jobs incentives he agreed to in 2019 as part of bipartisan negotiations on the Rebuild Illinois Capital Program. These incentives included, among other things, the Blue Collar Jobs Act, reinstatement of the manufacturer’s purchase credit, and elimination of the franchise tax. These incentives, which the Governor pledged to support in 2019, he is now calling “loopholes” that must be closed.

The Governor’s change of heart on incentives he previously agreed to shows us just how insatiable his party’s appetite is for more revenue and increased spending. Keep in mind that since the tax hikes of 2011 and 2017, Illinois taxpayers have handed over more than $65 billion in new revenue to the State. There is simply no need to have any tax increases or cuts to job creating incentives on the table right now.

In addition to the items mentioned above, the Governor also wants to eliminate a biodiesel tax credit that saves farmers and the agriculture community millions, and significantly reduce a tax credit scholarship fund that allows children from low-income households whose public schools are failing them to receive scholarships to attend a private school. Additionally, the Governor is proposing making cuts to or sweeping funds from the Local Government Distributive Fund (LGDF), road and mass transit funds, school infrastructure grants and capital project funds. People need jobs and a vibrant economy, and removing incentives that spur job creation and allow kids an opportunity to attend a better school is wrong, especially at a time when revenues are over-performing at levels never before seen in our state. 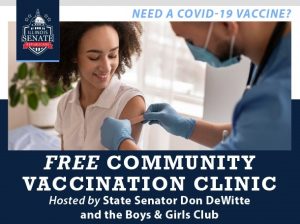 My staff and I are putting together a comprehensive list of summer community outreach events. Please visit my website senatordewitte.com for more information as event dates approach, but please mark your calendars now for these upcoming events:

Former Madigan Chief of Staff indicted, Republicans renew calls for ethics reform
On May 26, news broke that the long-time Chief of Staff for former House Speaker Madigan had been indicted by a federal grand jury on charges of perjury and attempted obstruction of justice revolving around the ComEd bribery scheme. Tim Mapes was in federal court on Friday morning, where he entered a “not guilty” plea to one count each of perjury and obstruction of justice.

This is just the latest in a long line of accusations, probes and indictments within the Majority Caucuses’ organization, and without meaningful reform of current rules and procedures, nothing will change. As of this writing, the Senate Ethics Committee has met only once. While over a dozen Senate Republican bills were denied hearings, the only bill the committee considered was a watered-down bill full of loopholes. We can and must do better.

I am a Chief Co-Sponsor of a comprehensive reform package designed to hold politicians accountable and give state’s attorneys more tools to combat public corruption. So far, the majority party has not scheduled a hearing on this bill, SB 1350. Lawmakers cannot leave Springfield without reforming a broken system that perpetuates a culture of corruption and distrust.

Dangerous decisions go unchecked as Governor, Democrats skirt Constitutional requirement
Gov. Pritzker is using a procedural maneuver to allow his appointees to the Prisoner Review and other boards to continuously serve without undergoing the Constitutionally-required confirmation process. This shady tactic was brought to light to the public this week by Senate Republicans.

A total of four unconfirmed Prisoner Review Board members have been serving for well over two years, making decisions on whether prisoners, such as convicted murders, rapists, sexual predators, etc., should be granted parole and released from prison.

Back in March and April 2019, Gov. Pritzker appointed four individuals to the Board. According to the Illinois Constitution, these appointees must be confirmed by the Illinois Senate within 60 session days of their appointment. In March 2021, those 60 days were approaching, but instead of the Senate Executive Appointments Committee taking up these individuals, the Governor withdrew their nomination and then reappointed them just days later—resetting the 60 session-day clock.

Senate Republicans argue that these appointees are making life-altering and potentially dangerous decisions without undergoing the appropriate and constitutionally-required review process. Republican lawmakers point to recent news about the latest convicted felon released by the Prisoner Review Board who is now a fugitive as a glaring example of why those serving on this Board must be vetted and properly scrutinized to the highest level.

Wall of Remembrance returns to Capitol 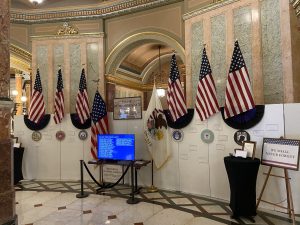 As is the norm, the Senate and House are scheduled to be in session on Memorial Day. To honor our nation’s servicemen and women who have made the ultimate sacrifice, the Senate Republicans are restoring the Wall of Remembrance within the walls of the Capitol.

For many years, Senate Republican lawmakers would join together to put up a Wall of Remembrance in the halls of the Capitol Building. This display was dedicated to paying tribute to Illinois’ fallen heroes. Unfortunately, with the COVID-19 pandemic, the Wall could not be displayed in the Capitol last year and was displayed virtually.

However, with lawmakers back in Springfield, the Wall of Remembrance is returning to the Capitol. Filled with photos and remembrances that constantly cycle on a large screen, the display will form a powerful and unforgettable testament reminding all who pass through the Statehouse that these are the men and women who offered our state and country the ultimate sacrifice.

Also in recognition of Memorial Day, Senate Republicans will hold a wreath-laying ceremony on May 31 at the Soldiers and Sailors Plaque outside the Capitol to honor our fallen veterans and pay tribute to their memory, sacrifice and the families left behind.

PrevPreviousSenate Republicans say no to tax hikes and cuts to jobs incentives for FY 2022 budget
NextSen. DeWitte Responds to Confirmation of Omer Osman as Secretary of TransportationNext