Clock is running out on ethics reform
Comprehensive ethics reform is a critical step for the government of Illinois to earn back the trust of the residents of the State. As we enter the final 8 days of the spring legislative session, time is running out to pass meaningful ethics reform. We cannot adjourn at the end of May without sending the Governor approved ethics legislation that holds lawmakers more accountable, and provides local and state prosecutors with more tools to investigate allegations of political corruption.

As of today, the Senate Ethics Committee has met only once all year. While over a dozen Senate Republican ethics bills were denied hearings, the only bill the committee considered this year is Senate Bill 4, which includes weak reforms and loopholes. SB 4, brought forward by Senate Democrats, fails to deliver necessary reforms and does not go far enough in ensuring those who deviate from their public oath of office are held accountable for their corrupt practices.

On May 17, Senate Republicans unveiled real, comprehensive ethics reform legislation. I am a Chief Co-Sponsor of this legislation. Senate Bill 1350 takes the provisions of SB 4 and expands and strengthens them in many ways. Our bill would require greater levels of transparency by elected officials in their official duties, while also providing new, important tools to county state’s attorneys and the Illinois Attorney General. Senate Bill 1350 would help root out government corruption by:

The constant stream of elected officials running afoul of the law and stories of self-serving deals by legislators have caused Illinoisans to lose faith in their state government. The only way that Illinois lawmakers can begin to rebuild the public’s trust is to pass meaningful ethics reform that will truly address the ongoing corruption that currently plagues the state.

With COVID-19 restrictions lifting across Illinois, I am resuming traveling office hours this month, with the first event scheduled in East Dundee on Tuesday, May 25.

The East Dundee event will take place from 9:30 AM until 11:30 AM at the Fox River Valley Public Library, 555 Barrington Avenue. District office staff will be available to assist individuals and businesses with access to state services, as well as answer questions and gather opinions about legislation.

We had to suspend these community outreach events for the last 14 months during the pandemic, and I’m pleased to be starting them back up again. Additional traveling office hours have also been scheduled in the following District 33 communities:

These traveling office hours are open to all residents in the 33rd District, and I would encourage anyone who is having issues with state agencies to stop by and receive assistance from my talented staff. This includes those having issues with unemployment, FOID cards and CCL licenses, professional licensing, and other issues. For additional information, please contact the DeWitte office at (847) 214-8245. 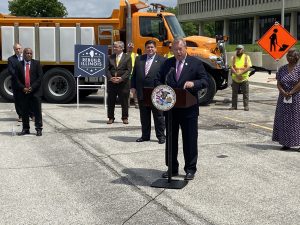 On Wednesday, I joined a bipartisan group of lawmakers for the launch of the new, $20.7 billion transportation infrastructure plan that will improve the state’s roads and bridges over the next six years. The new projects build on previously-approved improvements already completed through the Rebuild Illinois program over the last two years.

According to DeWitte, the multi-year plan will improve 2,779 miles of roads and 7.9 million square feet of bridge deck while creating thousands of jobs. Of the $20.7 billion to be spent overall, $3.32 billion has been earmarked for projects during the next fiscal year. Click here to see the full list of projects included in the six-year plan, and click here to see a list of projects specific to the 33rd Senate District.

The plan includes $83.43 million in improvements to state highways within the 33rd Senate District, and another $4.8 million in work on local highways, with projects scheduled in both Kane and McHenry Counties. Of that total, just over $16 million is allocated toward projects that should get underway very soon in Fiscal Year 2022. Not only will these projects create economic opportunity and an abundance of jobs, they will also improve safety on our local and state roads and bridges.

Click here to watch my comments during the press conference where the projects were announced.

Budget talks start to heat up
As the spring legislative session approaches its end, budget talks have begun to pick up steam at the Capitol. While negotiations are ongoing, I am calling for the removal of tax hikes on businesses that Gov. JB Pritzker proposed in his February Budget Address.

Since the Budget Address, the state has added $3 billion in unexpected revenues between Fiscal Years 2021 and 2022. Additionally, the federal government passed a federal relief package that will provide the state with another $8 billion.

Businesses, through no fault of their own, absorbed tremendous financial stress during COVID-19, and many closed their doors forever. As budget talks continue, any tax increase on businesses should be completely off the table.

Controversial sex education curriculum passes the Senate
On May 20, the Illinois Senate passed Senate Bill 818, a controversial education bill that would rewrite existing state standards for sex education in grades K-12. I opposed this bill.

The legislation would significantly limit local control over sexual education by requiring school districts to either teach the new standards as written or nothing at all.

These standards were formulated by advocacy groups from outside of the state, many of which are considered divisive.

Some of the contentious provisions that can be found in Senate Bill 818 include:

The legislation now heads to the Illinois House of Representatives for further consideration.

One step closer to normalcy
Following the CDC’s latest guidance, the State of Illinois has updated its Executive Orders and repealed emergency orders regarding face coverings. Thanks to these changes, fully-vaccinated Illinoisans are able to once again gather in most indoor and outdoor settings without wearing a mask.

Under the new guidelines, fully vaccinated people can:

Face-covering requirements are still in effect for vaccinated individuals when they are in a healthcare setting, congregated area, and using public transportation. Additionally, masks are still required to be worn at Illinois schools and daycares.

Furthermore, the repeal of the Illinois Department of Public Health’s emergency rules regarding face coverings means Illinois businesses are no longer responsible for their enforcement; however, businesses have the option to set policies requiring their use. 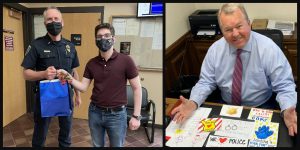 This week while I was in Springfield, my staff delivered cards to local police officers in honor of National Police Week. Community members from across the 33rd Senate District created homemade cards to show their appreciation for local law enforcement’s service and dedication to keeping their communities safe. My summer intern Ryan Schwartz is shown in this photo delivering cards to Lt. Antonacci at the West Dundee Police Department.

Thank you to everyone who participated in my “Appreciation for your Dedication” card drive for local law enforcement. In recognition of Police Appreciation Week, 17 different police departments were showered with cards, drawings, and well-wishes.

House Bill 3462 provides that every child reported to the Department of Children and Family Services (DCFS) or law enforcement believed to be a victim of sexual assault or sexual abuse has the right to have the child’s forensic interview conducted by an interviewer from an accredited children’s advocacy center if the service is available in the region.

House Bill 3461 makes the provisions of “Erin’s Law” a requirement rather than an option for school districts in Illinois. Erin’s Law, named after sexual abuse survivor and Illinoisan Erin Merryn, was signed into law in 2013 as a permissive policy that encourages schools to adopt an age-appropriate and evidence-informed curriculum that addresses sexual abuse.  Age-appropriate curriculum materials for educators must include a definition of prohibited grooming behaviors and boundary violations, and instructions for how school personnel can report these behaviors.

Illinois’ first female Lieutenant Governor passes away after cancer battle
Corinne J. Wood began her public service career serving as a member of the Illinois House of Representatives from 1997 to 1999.

In her role as Lieutenant Governor, she was a champion for women’s health. She tripled funding for the Illinois Office of Women’s Health, expanded mammogram screenings for low-income women, and launched a “Check for a Cure” program, which raised more than $2 million for cancer research.

She was first diagnosed with breast cancer in the 1990s and ultimately passed away from the disease on May 18.