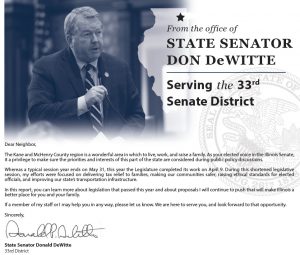 Over the last several days my 2022 End of Session Newsletter arrived in mailboxes across the 33rd District. This mailing is sent annually to households in every community I serve. It is not a political mailing. It is a legislative look back at activity from the 2022 session year in Springfield. Whether you are a Republican, Democrat, Independent, or other, please know the report found its way to you on purpose.

My office has received a few phone calls and emails from some who wonder why they received it. As the elected Senator for the 33rd District in Kane and McHenry Counties, I represent everyone who lives here; not just those who subscribe to my same political party. My office’s services are available and are just a phone call or email away. I also always welcome your input and ideas on how we can make Illinois a better place for your family. 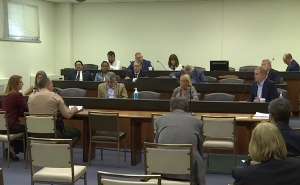 I serve on the bipartisan and bicameral Joint Committee on Administrative Rules (JCAR), and last week we were in Springfield to consider a new rule from the Illinois State Police (ISP) changing how the Pritzker Administration requires the agency to handle “clear-and-present-danger” reports when an individual applies for a Firearm Owners Identification (FOID) card. The rule was proposed in response to the July 4th shooting in Highland Park, in which the suspect climbed onto a rooftop along a crowded parade route and fired shots into the people gathered below, killing seven and wounding dozens more.

The suspect in that shooting was able to obtain a FOID card and legally purchase firearms, even though Highland Park Police had filed a clear-and-present-danger report with the state just months prior, alleging that the man had threatened members of his family and had threatened to commit suicide. The incident highlighted the need to strengthen FOID card review processes.

The Pritzker Administration says that its previous administrative rule had required the ISP to discard clear-and-present-danger-reports if there was no pending or active FOID card on record for the individual at that time. Following a 2019 shooting in Aurora, Governor JB Pritzker announced that his Administration was going to review existing rules and procedures to make sure that dangerous individuals were not able to obtain firearms. However, no changes were proposed to the clear-and-present-danger process between then and the Highland Park shooting.

The new rule requires the ISP to keep all clear-and-present-danger reports on file, regardless of whether the individual has a pending or active FOID card at the time. More work is needed by the Governor and his Administration to clear up the other gaps in their rules so that current law can be enforced to its fullest extent and so that going forward, dangerous people can be stopped from being issued a FOID card.

Following the JCAR meeting, I issued the following statement:

“Today, I supported the new rule that strengthens the FOID card review process to prevent dangerous individuals from legally purchasing or possessing firearms. The Pritzker Administration’s purported review of the FOID card process following the Aurora shooting in 2019 failed to recognize this gap in the interpretation and application of clear-and-present-danger reports submitted to the ISP. Had the Pritzker Administration done what they said they were going to do, which was to review and make sure laws already on the books were being implemented more effectively, the tragedy in Highland Park might never have occurred. Local police in Highland Park did their due diligence to alert the State Police of this individual, but because of the gap, which was overlooked in the Pritzker Administration, the report was discarded.”

Summer and Fall Events Continue in 33rd District
My staff and I continue to deliver a variety of constituent outreach events across Kane and McHenry Counties. Upcoming events include:

University Ends Training Program for DCFS Investigators
A prestigious training program will no longer be available for Illinois Department of Children and Family Service (DCFS) investigators. The University of Illinois at Springfield (UIS) has announced that it is ending its contract to provide a much-lauded training program and simulations.

The program has included in-classroom learning as well as simulations of the conditions that the investigators could likely face in the field.

According to officials from UIS, the university had strongly recommended that DCFS offer new investigators a five-week training course at the program, but the Administration was only willing to offer training completed during a single week.

DCFS also has simulation labs at Northern Illinois University and on Chicago’s south side.

The topic of DCFS investigator training has been a focus recently, especially following the death of Deidre Silas, who was killed earlier in the year during a home visit. She was the second investigator killed in recent years while on the job.

The agency has also faced significant controversy this year, with numerous stories regarding children the agency has interacted with, leading to the DCFS director being held in contempt of court a dozen times.