The following guest editorial was published in the Shaw Media newspapers in Kane and McHenry Counties on Tuesday, May 3: 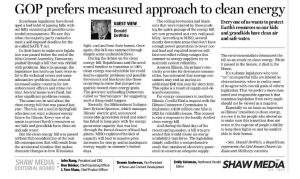 Statehouse legislators have developed a bad habit of passing bills without fully examining all possible unintended consequences. We saw this when the Majority Party rushed to meet a self-imposed deadline for the so-called SAFE-T Act. In their haste to make sure legislation was passed before the end of the 101st General Assembly, Democrats pushed through a bill that was riddled with problems. Since its passage, the Legislature has had to go back twice so far to fix not just technical errors, but also some substantive problems that created increased safety concerns for law enforcement officers and crime victims. Several issues were fixed, but other significant problem areas remain.

The same can be said about the clean energy bill that was passed last year. There is not a soul in Springfield that does not want a cleaner energy future for Illinois. Every one of us wants to protect Earth’s resources so our kids and grandkids have clean air and safe water. But the clean energy bill was passed without full consideration of the real-life consequences that will result from the accelerated timeline that makes dramatic changes to how Illinoisans light, cool, and heat their homes. Once again, rather than tapping on the brakes, this bill was rammed through despite some undeniable flaws.

During the debate on the clean energy bill, Republicans said the accelerated timeline to transition to 100% clean energy was admirable, but could realistically lead to capacity problems and possible brownouts and blackouts like those that have been seen in other states that jumped too quickly toward clean energy goals. The Governor and leading Democrats called us “fear mongers” for even suggesting such a thing could happen.

Just last week, the Midcontinent Independent System Operator (MISO), which manages the electric grid for Illinois, announced that renewable generation (wind and solar) has failed to keep pace with the energy generation capacity that was lost through the forced closure of fossil fuel plants. MISO further explained the lack of capacity will lead to massive price increases for energy, and an inadequate energy supply on summer’s hottest days. The rolling brownouts and blackouts that were summarily rejected by those pushing for quick passage of the energy bill are now presented as a very real possibility. According to MISO, several mostly downstate areas that don’t have enough power generation to cover normal load and required reserves, will likely face controlled rolling outages this summer as energy suppliers try to maintain system reliability.

Ameren Illinois, the primary electricity provider for downstate communities, has estimated that average consumers may end up paying an additional $500 this year for electricity. This spike is a direct result of supply and demand economics (Ameren does not profit from the cost of energy supply).

For energy consumers in this part of the state, ComEd recently filed a request with the Illinois Commerce Commission (ICC) to implement a $199 million rate hike in 2023. This request is also a direct response to the capacity issues that resulted from hasty passage of the clean energy bill.

Further exacerbating the issue, during the final days of the recent spring session, a bill was presented that would create an energy availability task force. The legislation simply called for a comprehensive study that monitored electricity generation to ensure an adequate supply. The environmentalists quickly denounced the bill as an attack on clean energy. While it passed in the Senate, it died in the House.

It’s a shame that legislators that vote “no” on impactful bills are labeled as obstructionists, when in reality most of us agree with overall goals of reform legislation. The fact that we prefer a more measured and responsible approach that examines legislation from every angle should not be viewed as a negative. Especially on an issue as important as Illinois’ transition to clean energy, we owe it to the people who elected us to make sure this transition does not occur at the expense of people’s ability to keep their lights on and be comfortable in their homes.