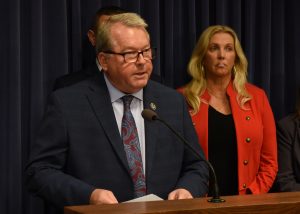 The Senate and House just completed the annual fall Veto Session, and the residents of Illinois were losers on several fronts, as majority party Democrats used their supermajority to push through an aggressive and dangerous agenda. From attacks on parental rights, the removal of protections against discrimination in the workplace, another gerrymandered map that strengthens their power and gives voters fewer choices at the polls, and the blocking of Republican bills that directly address the surge in violent crime in the state, we witnessed new levels of brazen partisan politics over the two-week session. You, as residents of Illinois, deserved much better from your state government.

Leading into the final week, I joined some of my Senate colleagues for an update on what we hoped to see, and bills we hoped would fail. I spoke about a package of public safety bills that Democrats refused to assign for hearings. Click here to listen to my press conference remarks, and click here to hear the full press conference. 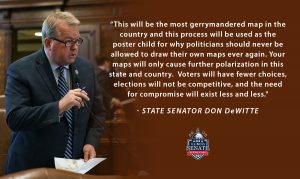 In spite of the fact that Gov. Pritzker vowed to veto any map drawn by politicians, several news outlets reported that the Governor and his staff actually engaged in the drawing of the Congressional map. If accurate, this would mean that the Governor not only broke his promises by signing two different legislative maps drawn by politicians, one of which has been ruled unconstitutional, but became an active participant in a process he campaigned against in 2018.

I expressed my disgust with the map proposal and process when it was brought to the floor of the Senate for a vote. Click here to listen to my floor speech.

Parental rights eroded during Veto Session
On Wednesday, Illinois Democrats voted to repeal the Parental Notice of Abortion (PNA) Act of 1995. Through House Bill 370, facilities performing an abortion procedure on a minor will no longer have to notify the minor’s parents or legal guardians 48 hours before the procedure. Previously, the law simply stipulated that a parent be informed of their daughter’s procedure, but there was no requirement for them to provide consent.

Following the vote in the Senate, I issued the following press statement:

“A parent has no more important role than to protect their children’s medical and emotional health as they help them navigate life’s most difficult decisions. By nullifying the Parental Notice of Abortion Act, Senate Democrats failed Illinois families, and even more important, they failed children facing one of the most important decisions they will ever make.

“The legislature has put a multitude of laws in place that dictate at what age children can engage in a variety of activities. It is ludicrous that we determine a child does not have the maturity or good judgment to decide if they will smoke, or drink, or get a tattoo, or go to a tanning bed, and then turn around and decide those same children can make their own decision regarding an abortion without the counsel and guidance of a parent or guardian.”

The Governor has indicated he will sign the bill. Please contact his office and tell him to veto this dangerous proposal. You can call his office at 217-782-6830 or 312-814-2121. Please also consider adding your name to our petition.

Democrat lawmakers vote to change Healthcare Right of Conscience Act
In a 31-24 vote in the late hours of Oct. 28, Senate Democrats rammed through changes to the Health Care Right of Conscience Act (HCRCA). The HCRCA has been a long-standing law that allows people to be protected from being forced into healthcare decisions that violate their religious or moral beliefs.

Until recently, the Governor’s nearly 100 Executive Orders related to the COVID-19 pandemic have gone mostly unchecked. However, based on protections provided to plaintiffs under the HCRCA, some courts appeared to be poised to rule against the Governor, which prompted the push by the majority party to amend the Act.

The new changes to the HCRCA state that its protections do not apply when it comes to COVID-related mandates. But the larger issue is not about vaccines, testing, or masks. It is about the removal of protections against discrimination in the workplace. Since the amendment was unable to garner a three-fifths majority vote in the House and Senate (required for immediate implementation), the changes do not take effect until June 1, 2022. That being said, it may be used in upcoming court cases and there are indications that the General Assembly may pass an identical bill during the upcoming January session, which would give it an immediate effective date.

As the legislation (SB 1169) moved through the Senate and House this week, we saw an unprecedented level of community engagement by Illinoisans who pushed back at efforts to weaken their protections from discrimination in the workplace. In all, close to 85,000 witness slips were filed in opposition to the bill. This number is unheard of in Springfield. One amendment received over 54,000 witness slips in opposition. To put that in perspective, of Illinois’ 102 counties, 79 of them have countywide populations lower than 54,000.

Despite massive pushback from everyday Illinoisans who viewed the proposed changes as a massive government overreach, Democrats still pushed through the bill, stripping away important protections against medical discrimination in the workplace. 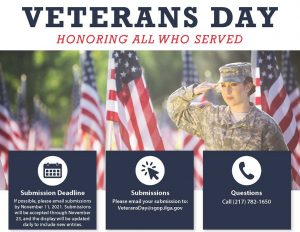 The Senate Republicans have been hosting an annual Veterans Day tribute since 2017. This year’s tribute will be on display at the Illinois Capitol from Nov. 11 to Nov. 20.

To help remember veterans, tell their incredible stories, and honor their service on Veterans Day, I am encouraging constituents to submit a tribute and photo of their loved ones who served their country so it can be displayed on the annual Veterans Day “Wall of Honor.”

The tribute serves as a reminder to everyone who visits the Capitol of the bravery and sacrifice of Illinoisans who answered the call to protect our nation.

Families who would like to participate in this year’s display should submit the following:

If possible, please email submissions to veteransday@sgop.ilga.gov by Nov. 11. Submissions will be accepted through Nov. 20, and the display will be updated daily to include new entries. Submissions can also be mailed to Veterans Day Wall, 309 G Statehouse, Springfield, IL 62706. For questions, please call 217-782-1650. 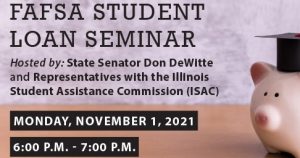 There’s still time to register for my FREE FAFSA/college financial aid seminar that I will be hosting Monday evening with the Illinois Student Assistance Commission (ISAC). The one-hour webinar starts at 6:00 PM.

This event is tailored for current college students, high school students exploring their collegiate options, and families that want to learn more about available financial aid. Specifically, the webinar outlines the financial aid process and provides insight on how financial aid works, how to apply for it, student eligibility, and how it can be used to help pay for college. It introduces the Free Application for Federal Student Aid (FAFSA) and the Alternative Application for Illinois Financial Aid, along with summarizing state and federal aid programs for undergraduate and graduate level students.

Because this is an online event, registration is required. Information on how to join the webinar will be sent to registrants prior to the November 1 event. To register, please visit: https://www.ilsenategop.org/sen_dewitte_virtual_fafsa_student_loan_seminar.